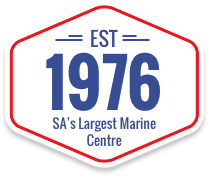 Why are Bar crusher Boats so comfortable? Bar Crusher fishing boats don't give you that uncomfortable, hard pounding ride like the old fashioned aluminium boats. Here's why, most people that have been for a ride in an aluminium boat on a choppy day have been disappointed with the hard ride. The reason for this is that many of the "pressed sheet tinnie" style boats and many plate based fishing boats have been traditionally built with a relatively shallow dead rise or V at the transom, (often as little as 10 degrees). In other words, viewed from the rear they appear to have a fairly flat bottom. Bar Crusher fishing boats, in contrast, with their water ballast system are built using between 18 and 20 degrees of V at the transom depending on the model chosen. This deeper V allows the boat to cut through chop providing a genuinely soft ride, (we're happy to prove it to you in rough conditions).

Boats generally plane with a nose high aspect that requires the rear half of the hull to effectively part the waves when traveling through rough water.

It is interesting to note that a sharp V at the nose or bow does very little to provide a better ride through chop as it is usually out of the water when planing. In fact a sharp entry or steep V at the nose and a flatter hull at the transom can often create a hull that broaches badly in a following sea, (ie. running with the sea or down the front of a wave). 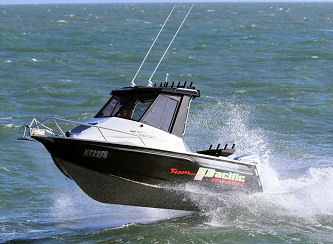